George and Joan became involved with the Alzheimer Society in their community shortly after Joan’s diagnosis. When George found out about the Forward with Dementia project, he was thrilled!

When George’s wife Joan (who he had met when he was 9 years old) began missing doses of her medication and then misplacing her medication altogether, both George and Joan became concerned and made an appointment to see her doctor. She was eventually diagnosed in 2013 with dementia and lived at home for several years with George providing 24/7 care. Eventually when that became too much, Joan was moved to long-term care. After Joan was diagnosed, George became very interested in advocating for those living with dementia, starting in 2016, while Joan was still at home and continued when she moved to long-term care.

George and Joan became involved with the Alzheimer Society in their community shortly after Joan’s diagnosis.

That is when George started attending a support group. He found the group very supportive, and he receive some good resources. In addition, George began doing a lot of research on his own to educate himself about dementia. He found, unfortunately, that there were not a lot of resources out there that could help him in supporting his wife. In his quest for more information, George even approached his local MP to talk about what they were doing for families affected by dementia. George has spent many years speaking to the media, to medical students, participating on committees, and being involved in research. After her death in February 2019, he even served on the Family Partnership Council at the Villa where she had lived. 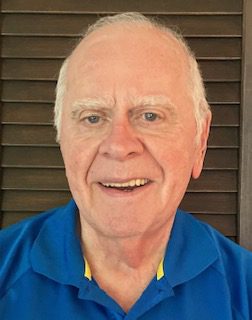 When George found out about the Forward with Dementia project, he was thrilled!

In all his research, he found very little information that would help him as a care partner to his wife. He knew that the new website that was being developed would be the first of its kind in Canada and would help to fill a gap in resources.

“If I had had this information early on, I would have gone right on.”

George also feels that this website will go a long way in helping to reduce the stigma surrounding dementia. Even doctors need to use the new website, according to George, because some of them just dismiss symptoms of dementia for old age.

In George’s perspective, the website will be very valuable in that the content of the website was created in collaboration with people who are living with and supporting those with a diagnosis of dementia.

George and the other members of the advisory group with lived experience were consulted on every detail of the new resource, even something as small as a picture was vetted by them. George truly believes this website will take off and plans to do whatever he can to promote it.

Connect with your local Alzheimer Society

To find information about the Alzheimer Society, go to “Planning to use services” on our website.